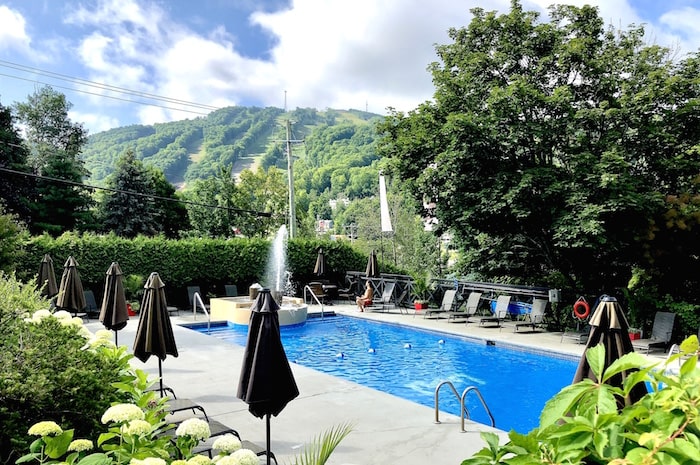 The call of the open road is a legendary one. Piling into the car and marking up the map with must-see attractions, pit-stops, and views is a time-honoured way to travel. Getting out of the urban grind and connecting with some wide open spaces might be just a touch cliche, sure, but it can also be a lot of fun.

A trip to the French countryside might be a little ambitious for a getaway, but this country’s very own French Canadian countryside will do very nicely – and you don’t have to worry about exchange rates or passports. East of Montreal you’ll find green fields, rolling hills, stunning sprays of wildflowers, rivers and lakes, mountains, and a series of small towns.

Called the Eastern Townships, or, en français, Cantons-de-l’Est, the highway-connected area south of the St. Lawrence and north of the U.S. border offers visitors a multitude of ways to experience what it has to offer.

It might be more obvious to think about this part of the country during the winter – after all, this is the land of maple syrup and where the Ski-Doo was invented. But in the warmer months you’ve got the makings of an epic road trip, where you can do things like explore the realm of fairies, feed some donkeys, mine for copper, and soak your feet in the hot tub at the end of your busy days.

There is a lot to do in the part of the province. A lot. It’s actually kind of mind-boggling. You can work out your trip to fit just about any avenue of approach or scope of interest, from outdoor adventuring to something as micro-level as cheese. Yes, cheese!

I recently got to spend some time exploring the Eastern Townships with my six-year-old son, and we had an itinerary that ticked all the boxes when it came to discovery, learning, history, culture, scenery, and food. Here’s our guide to an eclectic and epic road trip in Quebec’s Eastern Townships.

You’ve got sensible shoes on and a hard hat – this probably isn’t your typical vacation look, but get ready to dig in deep – metaphorically – with a step back in time and down, down, down the shaft of a historic copper mine. Over 140 years old, the Capelton Mine is one of Canada’s largest copper mines, and you can still catch a glimpse at some of that bewitching sparkling chalcopyrite in its walls.

What is chalcopyrite? Great question! Your guided tour will cover what the miners were looking for, how they did their digging (hint: it was hard, hard work), who they were and what their culture was about, and the legacy of the mine. You can’t go too terribly far down – it’s been flooded a couple of kilometres deep for decades – but you can go down far enough to feel the temp drop and get a sense of what life was like for a miner over a century ago. Don’t worry, there aren’t any ghosts; deep religious beliefs of the miners meant no bodies would ever get left behind.

No, your Google Translate didn’t steer you wrong (“donkey asses in panties”) because this is a donkey farm, and it is named for something akin to panties for donkeys – more like little French short pants, actually. The name comes from a tradition in France where labouring donkeys wore pant-like drapes of fabric to protect them from rough conditions. One half of the couple behind this donkey farm hails from France, and her partner had access to her family’s land, and the idea to open a donkey farm in the Cantons de L’Est was born.

A significant portion of the farm’s efforts is education about donkeys, while they are milked, and the milk used to make natural soaps, lotions, and other beauty products sold on site. Kids can take part in a mini scavenger hunt, and everyone can feed the donkeys and other animals, and get a glimpse into the life of an animal we don’t engage with very often in Canada.

J. Armand Bombardier had a modest garage in Valcourt, and lots of dreams. While we know Bombardier these days as a major player in the global transportation scene (they manufacture planes and trains) did you also know that Bombardier began with an aspiration to create a way to get around rapidly in the snow? What we know now as the Ski-Doo is based on designs and early models done by Bombardier. He changed the face of Valcourt forever, and this exceptionally well-appointed interactive museum is a homage to his vision and skills.

Make sure to begin with the intro film, an immersive multimedia presentation done in English or French inside the original Bombardier garage. Save time to create your own crazy animated vehicles and watch them sail or trundle along the big screen display (and e-mail yourself your very own patent), and take the pilot’s seat in a jet flight simulator. Tons of fun – and learning – to be had here.

Have you ever heard of Arthur-Osmore Norton? Unless you happen to know a lot about industrial jacks, you probably don’t. The philanthropist and businessman was a prominent Coaticook resident, and his family home a longstanding fixture in the community. Passed down to his daughter, who never married nor had children, the beautiful home ultimately came into other hands for other uses, such as a girls’ boarding home, before becoming a museum and event location.

Using period-specific donations from the Coaticook community, the home is set up to closely mimic what it would have looked like during Norton’s heyday – you can even still use the old fashioned light switches that have remained intact. Guided tours are available, or you can wander on your own. The uppermost area of the home is used for contemporary local art exhibits, and the venue also hosts events like Afternoon Tea and other gatherings of note. Take some time in good weather to check out the yard, and the interactive historical explainer about Norton.

If you’ve been on the road for a while, what better break than to take a hike – literally. Parc de la Gorge in Coaticook is a spectacular spot for recreation, with its trails and campsite. Trails are anywhere from three to 20 kilometres, and there are places to use mountain bikes, and key spots like a cave, a dam, observation towers, a mini farm, and the iconic suspension bridge. The highlight for many of the visit, the suspension bridge is 50 metres above ground, and great fun for the adventurous set.

Another way to get to know Parc de la Gorge in Coaticook – and its suspension bridge – is to go at night to enjoy Foresta Lumina. Quebec’s Moment Factory came up with the interactive illuminated night hike in 2014 to celebrate the town of Coaticook’s 150th birthday. Start off by whispering a wish and collecting a special rock, then wind your way through the park’s basic trail loop, stopping to see displays and projections that draw you in, and even have you participate. By the end you are ready to return your rock and ensure your wish comes true, as you slip back out into the velvet dark of night, ready to sleep and dream.

Before the event gets underway at sundown you can spend some time in the area around the entrance, which includes a restaurant, Le Coffret d’Imagination, as well as a separate ticketed display called Repere des Fees, which takes you into the imaginative world of fairies. It’s a little silly, but kids will love it.

The Granby Zoo has been a destination in the region since 1953, and has evolved to expand its mission of education and conservation as well as its offerings. The grounds are divided by geographic region, and range from a petting-zoo style area to a place to get up close with some (animatronic) dinosaurs.

A small monorail with a French-speaking in-person host (and English translations on cards by request) gives you the chance to see some of the animals from above. While on the ground, kids will especially enjoy the passport they can get at the entrance and then go in pursuit of stamps within the African region.

What’s nice about the Granby Zoo is that it does feel more intimate than other major North American zoos, and visitors do get to see the animals in open enclosures that don’t necessarily seem like they are in captivity. The Granby Zoo also offers the AmaZoo waterpark, if you happened to have tossed the swimsuits and towels in your travel bag.

Give yourself some time to stroll around the towns between meals and experiences, as some of them have quite a bit to offer. One highlight is the old town of Bromont, and Rue Shefford in particular, which is lined with historic homes and buildings and markers and signage to explain their significance. There are restaurants galore, as well as shops and other businesses to peek into.

Over in Granby you can use the multi-use path by the Yamaska River and Lac Boivin (and keep an eye out for a lot of terrific public art), and in the business district on Rue Principale check out historic buildings and old town charm.

Eat your way through the Townships

The Eastern Townships are fertile grounds for foodies, thanks to their role in the province’s agricultural economy, longstanding devotion to locally-sourced goods, and an understanding of the power of food to speak for a region. It is easy to plan a trip around eating and drinking – in fact, the Cantons-de-l’Est tourism folks have an entire section of their website dedicated to helping you “Taste the Townships,” and building an itinerary based around what you love, whether it be beer, cheese, wine, or dining out.

For our trip, we had two nights each at two properties in prime locations in the region. Chateau Bromont is nestled at the base of the Bromont ski resort hill (you can see the chairlift from the property), and their two-level suites offer incredible comfort. They have both an indoor and outdoor pool, and an acclaimed on-site restaurant, Les 4 Canards, that offers table d’haute dinners and buffet breakfast. For outdoor adventurers, Bromont has mountain biking and a massive waterpark for peak summertime enjoyment.

Over in the Magog-Orford area is the Estrimont Suites and Spa. Known for their multiple hot tubs and outdoor spa experience, along with the pool, this hotel has suite-style rooms that are cozy and quaint. The grounds offer lots of ways to play and relax, and there is an onsite restaurant as well as bar area, and they offer a very impressive buffet brunch on the weekends.

Getting there and around

For best access by air, you’ll want to use Montreal as your airport base. Montreal’s main airport is YUL – Pierre Elliott Trudeau International Airport, served by major airlines like Air Canada, West Jet, and Air Transat. You can rent a car from the airport and hit the road for the Eastern Townships from there.

Want to see more of our trip to the Eastern Townships? Check out my Instagram Story Highlights “Cantons de l’Est” for the whole trip in photos.